Context: Made into a direct painting at Foufounes Électriques in Montréal

Valérie Blass holds an MFA in visual and media arts from Université du Québec à Montréal. She has had solo institutional exhibitions in Montréal, Québec City, Toronto and Calgary. In 2012, Blass was commissioned by Public Art Fund New York for a yearlong group exhibition at the MetroTech Center and was selected to participate in the major survey exhibition, Oh, Canada – Contemporary Art From North North America at the Massachusetts Museum of Contemporary Art. In 2013, Blass' work was included alongside such artists as Abbas Akhavan, Nick Relph and LaToya Ruby Fraser in the exhibition Traces of Life in Berlin, Germany. The work of Valérie Blass was recently presented in parallel to the Istanbul Biennale at the Art International Istanbul fair, in a group exhibition curated by Geoffrey Farmer at the Art Gallery of Alberta and in a solo exhibition presented by Parisian Laundry Projects at The Hole in New York City’s Lower East Side. Blass’ work is found in the collections of The National Gallery of Canada, the Montreal Museum of Fine Arts, the Musée d'art contemporain de Montréal, the Musée national des beaux arts du Québec, The Royal Bank of Canada, the Caisse de dépôt et placement du Québec and innumerable corporate and private collections throughout Canada, the United States and Europe. Valérie Blass was the recipient of the prestigious Martyn-Lynch-Staunton award, multiple awards from the Gala of the visual arts organized by the Association of Contemporary Art Galleries and the Prix-Louis-Comtois from the City of Montreal.

Valérie Blass (born 1967) is a Canadian artist working primarily in sculpture. She lives and works in her hometown of Montreal, Quebec, and is represented by Catriona Jeffries, in Vancouver. She received both her Bachelor of Fine Arts and Master of Fine Arts, specializing in visual and media arts, from the Université du Québec à Montréal. She employs a variety of sculptural techniques, including casting, carving, moulding, and bricolage to create strange and playful arrangements of both found and constructed objects.

In a 2011 article in the Canadian magazine The Walrus, her practice of sculptural assemblage was compared to artists such as Marcel Duchamp and Louise Bourgeois. Her work has been collected by the National Gallery of Canada, Musée d'art contemporain de Montréal, the Royal Bank of Canada, and several other private collections.

Blass' work has been presented in several notable group exhibitions, including

She has also exhibited at the Power Plant and the Blackwood Gallery in Toronto, as well as at DARE-DARE and the Clark Arts and Dissemination Center in Montreal.

Her work has been collected by the National Gallery of Canada, Musée d'art contemporain de Montréal, the Royal Bank of Canada, and several other private collections. 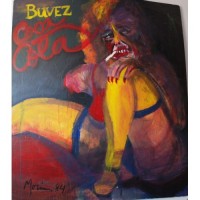